A New Yorker In San Francisco

San Francisco, CA -- “Drink it.  Enjoy it.  What could be simpler than that?”

New York Times chief wine critic Eric Asimov shared this insightful tip with an audience of 150 eager oenophiles, or wine lovers, at San Francisco’s Commonwealth Club.  Asimov was in town to promote his memoir and manifesto: How To Love Wine.   I admit, the talk was a little high-brow for me, but I did learn that Asimov thinks tasting notes, or wine descriptions such as tastes like black current with a hint of a rare leather-bond book, are a total waste of time. “Do they convey anything relevant at all?” asked Asimov.


I hit the jackpot at the end of the conversation, led by Virginia Miller, San Francisco Bay Guardian head food and wine writer, when my question was selected from a pile of handwritten queries.  “What’s the craziest thing you’ve ever done under the influence of an awesome bottle of wine?” Bingo.  Seriously Asimov, I’m handing you my Carte Blanche card to go wild.  His answer: “I’d open up another bottle of wine.”  Really? That's your wild story?


After that response, I was ready to bolt out the door toward the wine tasting reception—the challenge was so were 150 of my closest oenophile friends.  Given that there were only two people pouring wine, the lines were very, very long and I was growing very, very desperate.  Still, I waited.


In line I met vintner Christopher Buchanan owner of Redwood Country Wines.  His operation is in Humboldt County along a mountaintop ridge in Miranda near old-growth redwoods, the Mattole and Eel rivers, and the Pacific Ocean.  His terroir—the combination of geography, geology and climate might just be the recipe for an award winning bottle of wine that I will be eager to try.


After waiting in line for 20 minutes, I sampled a flight of pinot noir, made by Bravium winemaker Derek Rohlffs.  My favorite was a Jackpot Black 2011.  I didn’t even bother with making up silly tasting notes to impress the winemaker.  I’m actually quite good at saying stuff like tastes like crushed blackberries and cassis with a hint of black pepper aged at the Bancroft Library in John Fremont’s journal from his 1843 expedition over the Sierra Nevada.


Taking the advice I’d heard earlier from New York Times wine critic Eric Asimov, I drank it and enjoyed it.  What could be simpler than that?

Posted by divine daytripper at 8:33 AM No comments: 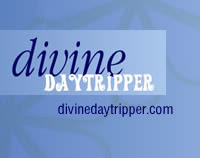